MOGUAI just went on tour through North America. Hammarica caught up with him for an exclusive interview!

If you could steal one thing from Deadmau5′ studio, what would that be?

I would steal his monitor setup 😉

On ITV Live we heard that at one moment in your career you played hardcore/gabber. Did you also produce these styles at one time?

I didn’t play gabber or hardcore, I would name it pretty hard techno! At that time when I started djing electronic music was very fast, hard and had an average bpm number of 160-175bpm. I know that sounds fast, but in the early nineties it was just normal because Techno was very much influenced by Industrial music and EBM. For sure I produced tracks during that time, for example my first EP “Best Before End” on the Belgian label Important Records was 150bpm. That was an Acid EP and when I hear it nowadays, I can’t imagine that I ever did it, because that style is so far away from what I’m up for and feeling now!

Where do you see your musical direction going to in the next five years?

I go with the flow and I’m inspired by life, so my musical direction isn’t really predictable. But what I can say is that I’m relaunching my label PUNX, so I’m going back to more revolutionary, punk-rock influenced music.

Is there any piece of technology you can’t wait for to hit the market?

I haven’t yet checked out Abelton 9. I know it’s been on the market for a few weeks and I’m keen on to check out the new features.

The most hilarious moment while on tour now in North America? 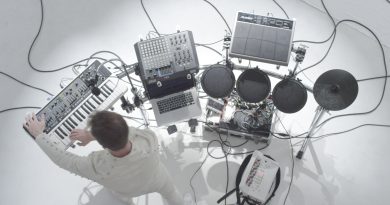 ALPINE UNIVERSE EXPLAINS HIS LIVE SET UP ON VIDEO

April 9, 2016 EDM Africa Comments Off on ALPINE UNIVERSE EXPLAINS HIS LIVE SET UP ON VIDEO May 7, 2015 EDM Africa Comments Off on EDM DJ and Producer Jacky Greco Releases “Dragon” in Collaboration With Carlo Astuti