Since Truckasauras‘ first performance, they have been repeatedly redefining electronic music in the live setting. From underground house parties, to impromptu street performances, to proper rock venues, Truckasauras’ explosive lo-fi, audio-visual, live sets continually raise the bar for not just electronic music, but anyone seeking to captivate an audience and rock the party.

Bordon’s live video mash-ups are composed from some of the worst entertainment American television has to offer (vintage WWF, monster truck rallies, infomercials, instructional videos, etc. ). In the same way that Kraftwerk rejected American Rock’n’Roll for an exaggerated caricature of German-ness, so does Truckasauras reject the overly cool and aloof hipster in preference for an exaggerated American persona, both earnest and self-loathing.

How would you describe a textbook Truckasauras fan?

What is the worst thing that could go wrong during a live performance?

Running out of beer. What is the worst thing that went wrong during a live performance?

Ran out of beer.

Your most fond piece of gear from the Truckasauras collection?

What pushes your adrenalin level?

The biggest dick in EDM?

Explain something so technical that even nerds wouldn’t be able to grasp.

Is there a certain age at which people should stop going to raves?

To quote the bass player of Journey: “Do your thing, dog…”

What is your dream project? THIS DJ BUILDS HIS OWN ROBOT SUITS AND SPACESHIP BOOTHS

December 8, 2015 EDM Africa Comments Off on THIS DJ BUILDS HIS OWN ROBOT SUITS AND SPACESHIP BOOTHS 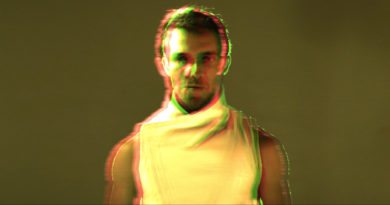